American International Medical University (AIMU) held its eighth annual Convocation and White Coat Ceremony at the Royalton Resort, St Lucia on 29th September 2017. The event was graced by Her Excellency, Dame Pearlette Louisy, the Governor General of St Lucia. The chief guest was Mr. Kenneth Monplaisir, QC. The ceremony began with the arrival of the Governor General and the National anthem. The process of graduating students and white coat recipients into the convocation hall followed. The Academic Procession was led by the Chief Guest, Mr. Monplaisir followed by the AIMU Vice-President of Administration, Mr. Urban Dolor, the Dean, Dr. John Klir, the Associate Dean of Medicine, Dr. P. Ravi Shankar and the Associate Dean of Nursing, Ms. Grissel Leon. The Masters of Ceremonies for the evening were Ms. Gbemileke Omotoyinbo & Mr. Chukwuebuka Emechebe. The event got underway with Christian, Muslim and Hindu prayers reflecting the diversity of the academic and student body at AIMU. 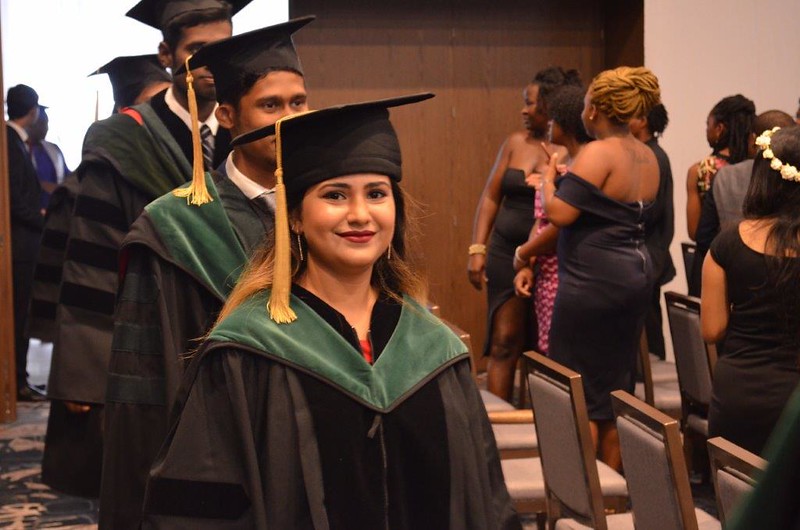 In his address, Dr. Christopher Rose, Professor of Behavioral Sciences and Medical Ethics stressed the need for constantly updating one’s knowledge and the fact that medicine and nursing are lifelong callings. He also stressed the similarities between St Lucia and Canada.

The Graduation Ceremony commenced with the address by Mr. Dolor. He stressed how AIMU is preparing for accreditation and the various initiatives which have been undertaken to strengthen the curriculum. He also informed the audience that Dr. Rose is available to provide personal counseling to the students. He also introduced the Chief Guest, Mr. Monplaisir.

Dr. J.Rambally, a board member of AIMU distributed the certificates to the best outgoing medical and nursing students. The best outgoing medical student was Dr. Candida Dhanaraj and the second best was shared between Dr. Nilofer Khan and Dr. Naaz Nasar. The best outgoing nursing students were Ms. Ikpeba Cynthia and Ms.Jozeete Philogene. In her acceptance speech Dr. Dhanaraj mentioned six rules for making it through medical school. Dr. Khan started her speech with a moving poem devoted to her late mother. A recording of the brief speech by Dr. Nasar was presented. The nursing student Ms. Cynthia mentioned about her experience as a nursing student at AIMU while Ms. Philogene thanked her teachers, classmates, parents and others.

Dr. Aisha Cox, Assistant Dean of Prehealth, provided the vote of thanks. She thanked various dignitaries who graced the occasion, the faculty members, staff, and Dr. Patra and Ms. Sahana Salins, the Registrar for making the Graduation ceremony a success. She also thanked all the graduates for choosing AIMU as their alma mater. Floral bouquets were presented to honor the Governor General, the chief guest, Drs. S. Tobias, and E. Tobias and Mrs. Lecenta Desir-Dolor. After this there was a photo session of the newly graduated doctors, nurses and white coat recipients with the faculty and dignitaries. The program was followed by Dinner.

The entire program can be viewed online at https://www.youtube.com/watch?v=wCdmdVya6uM&t=4397s